Birth of a duo

Hélène Gustin “Colette Gomette” and Tanja Simma “Anna de Lirium” first met in Brazil in 2014 while on tour in South America. After more than 25 years of solo touring, performing in international theater festivals, on the street or in the corridors of hospitals, they honed their characters and their skills and became masters in the art of clowning.

Unbeknownst to the other, during all this time, each of them had been looking for just the right clown partner.

And here they are! Two fabulous soloists united into one hilarious comic duo.

They have already played their show “THE ONE & the one” in more than ten countries (Colombia, Peru, Brazil, Nicaragua, Salvador, Honduras, Finland, Spain, Portugal, Austria, France…)

THE ONE & the one

The tall one and the short one.
The burly one and the tiny one.
The laughs are huge, but it’s about so much more than just their difference in size.

One thinks of herself as smarter than the other one who is stupid enough to believe that she is.

The tall Anna is a big bundle of affection, always ready to help, just so that the other one will notice her. Whereas the tiny Colette revendicates freedom and independence without actually knowing what they are or where to find them.

One's strength is her size, the other’s, her speed.

Tied to each other like Yin and Yang, bacon and eggs, cheese and wine, separate but united, together but... just how far apart is the right distance?

Their fragile balancing act mirrors our humanity and shows us the difficulties of human relationships. The excess of kindness, the hidden desires, and the selfishness that can challenge a friendship.

These two ingenuous beings with their seemingly simple stories allow us a deep look into the essence of being human.

Our passion for Clowns is our motivation. We stand for a sensitive, clever and subtle clown with a strong character.

Our characters are the key to our show. We wanted a minimalist style, with a simple scenography and few props to stay faithful to our first encounter and continue this 4-person journey (Colette and Anna and Tanja and Hélène) in an easy way.

From the first day of this adventure we wished to design our show in form of short clown numbers, that could be mixed and matched according need. Our goal is to be able to play “anywhere-anytime”.

The show can be played as a whole but also in the form of short extracts or passages, which can easily be integrated into a circus show or a cabaret for example. We wish to meet the audience wherever they might be, and it is our dream that the clown remains popular and accessible to all.

Why the red nose?

The red nose is a mask, “the smallest in the world”.

The clown is a fighter without knowing it, she goes against the stream. As a natural anarchist, the clown lives her life freely, without any dogma to respect, except her own. The clown lives neither in the future nor the past but lives intensively in the present moment. Her weaknesses, her failures, the risks she takes are the reasons of her success.

The clown is an open book that poetry flows out of.

Her body expresses more than her words. Her language is universal.

The audience accompanies the clown on a journey full of sensations, strong emotions and laughter.

The red nose creates a distance with the audience, which has a magnifying effect and allows a more intimate and deeper encounter with the character.

Look deeply and you’ll begin to see just how much we’re all alike.

You are both amazing clowns, so now you will be twice as amazing!!!

Fantastic! A clown-mariage made in heaven!

Yesterday in the Teatro Luis Poma, with “THE ONE & the one”, the dream has become reality; to see a clown show where talent, technic, dramaturgy and directing stay in perfect balance. It’s not only about the extraordinary talent of both interprets Anna & Colette. As worthy heirs of Samuel Beckett’s theatre, they transcend the classical pair of silent film and demonstrate tolerance, friendship, diversity, solidarity and sexuality without being rude or didactic. The Austrian Anna and the French Hélène are not only fantastic but also great artists.

Suddenly the first laugh, made by a very young child. Goal!!!!!! From where comes this never-ending trill? Why does this irrepressible laugh evoke in me the same emotion, abolishing the passage of time, reunifying in the same exclamation a sixty-year-old man and a very young child? On stage the big naïve one and the short aggressive one, offer the audience of the the Théâtre de l'Arlequin a full one hour of resuscitated childhood. Events lying deep in our memories quiver up to the surface. Young and old are taken into a strange dramaturgy where the strings of our affective lives - annoyance, tenderness, rage, suspense ... - cross into each other narrating a story without words, spiced up by the slap-stick, the self-mockery and the performing constraints of the art of clown. Laugher, so it's said, is unique to man. The trill of this young child proves that he deeply identified with these funny characters and their red noses; that he found his own human gesture in theirs, and then a clumsy move, something unexpected, a tomfoolery elevated him above this event and brought him to “reflect” upon it. Initiating him to a thought-provoking conscience. Unique to man. And his reward is not an “A” on his philosophy homework but laughter, this wonderful language of joy. The laugher of this young child, mine, and that of the entire audience.....artistry of the highest form! 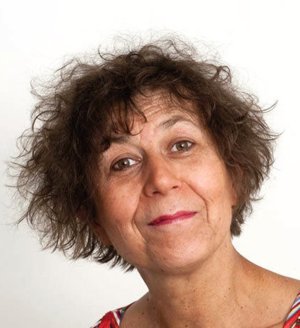 Hélène Gustin. Clown, dancer and teacher, trained at the École d’Art Dramatique Charles Dullin in Paris, 1981. Her clown character Colette Gomette was born 1995 – a formidable clown known for her primitive and asocial temper. She has performed in France, Belgium, Portugal, Austria, Chili, Brazil, Colombia, and Canada… 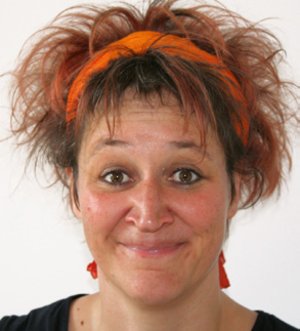 Tanja Simma. She is a graduate of the University of Music and Performing Arts in Vienna and trained with Henri Brugat and Wolfgang Gufler at the École de Mime et Clown in France. She was the first female Austrian to perform with Cirque du Soleil and appeared in “La Nouba” in the United States, “Pomp Duck and Circumstance” in Germany and the first production of “Palazzo” in Vienna.

She is the driving force of her “Comicompany”, co-founder of Theater Olé, the first clown theatre in Vienna and she is one of the key members of the Rote Nasen Clown Doctors.